The difference between posts 13 and 14 is that 13 has two radially drilled and tapped holes bringing up the problem of cross drilling a hole accurately. However, added in this case is the need to drill a second hole radially in line with the first. First though, scribe a line at 40mm from the end of the post to indicate the position of the first hole. Photograph 5 shows that I used the Hemingway cross drilling jig  to drill and tap the post with the second hole accurately positioned by just feeding the cross slide by 40 mm.

However, the jig did not position the workpiece suitably to a make possible the 40 mm traverse required but as can be seen in the Photograph this was overcome by turning the top slide through 90° and using this to initially feed the jig nearer the rear of the lathe, the 40 mm could then be achieved using the cross slide. Incidentally, I again used the auto feed mechanism mounted in the drill chuck when tapping the radial holes in the post.

The reader may ask why the radial holes are blind.  It will be found though that a ball race runs up and down between the two left hand posts, passing one of the holes if it were made as a through hole. 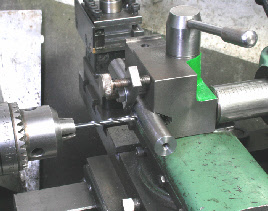 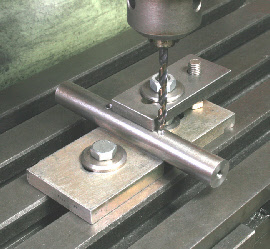 As many readers will not have the Hemingway jig, or similar, the following will be almost as easy. Set a fence on the milling machine table with its edge in line with the cross travel, using an engineers square off the table’s front edge. This will be sufficiently accurate. Now choose the centre drill that you are going to use, 8mm diameter or bigger preferably, and use this lengthwise as a spacer to set a second fence parallel to the first. With the centre drill now in the drill chuck adjust the table traverse so that the drill passes centrally between the two fences and lock the table traverse in this position. With that done the post can be clamped in place as can be seen in   Photograph 6 and the holes drilled and tapped, using the table's cross traverse to set up their positions.

These are simple items with normal workshop tolerances being more that adequate, with just one.  exception. The 19mm diameter ball race moves up and

down between the two posts mounted at the 35mm centres dimension and whilst the clearance in the holes will permit a small amount of adjustment these two holes need a little more care in positioning them. Also, to ensure that the four posts all stand upright it would be a good idea to use the top plate as a template for drilling the holes in the bottom plate.

The bottom plate as drawn does not detail how the machine will fit to the lathe as obviously this will vary  depending on the lathe it is to be used on. See though the Myford mounting assembly for a method of mounting it to a series seven. The reader will have to determine the best approach for other lathes though the published method will probably be a starting point for the method to adopt. Similarly, the drawing does not include the holes for the machine guard which are found on the pages for that.

The Input drive spindle starts on the next page