Most home workshop users will consider sharpening end mills a non starter due to the complications of sharpening its edges. This is understandable and whilst I have provided designs for doing this I consider it is only worthwhile if the milling machine is made considerable use of. In this case, more than one of each frequently used size can be obtained and as they become blunt stored until there is sufficient to warrant setting up for the task. In this project though, I am only concerned with sharpening the end cutting edges.

Whilst having previously suggested the method described in this article it was then in conjunction  with the two grinding rest that I have designed, its purpose is therefore to eliminate the need for these by suggesting a much simpler alternative.

As the end cutting edges are almost entirely responsible for the quality of the finish achieved when using an end mill to machine a surface, sharpening them is very worthwhile. However, unless this can be carried out quickly many workshop owners will understandably choose to acquire a new cutter, especially as they can now be purchased relatively cheaply. The basis of the method being proposes is to plunge the  cutter into the front face of the grinding wheel while accurately controlling the angles P and C, see Sk. 1. Indexing the cutter for each edge is achieved by mounting it into a square holder.

The reader may consider plunging the cutter into the wheel's face is a dubious method as it will duplicate any irregularities on it. This is correct but the cutter will only cut on the end mills tip by an amount equal to the feed rate per cutting edge, probably no more than 0.05mm wide even for a roughing cut. Therefore, the state of the rest of the edge is unimportant, that is providing the cutter is ground with a concave end as it should be.

To avoid the need for the adaptable grinding rests that I have used previously, I am adding a temporary attachment to the off hand grinder to provide a simple rest just for the purpose. I initially considered securing this directly onto the grinders existing rest but this resulted in the cutting edge being too high on the wheel's curve, as a result producing a greater angle than was ideal. Therefore, the rest had to be lower and has to replace the existing rest but just for this task, Photograph 1. 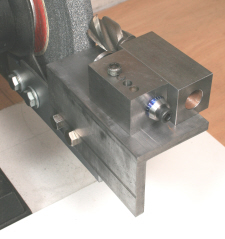 Important, If you have made either of my grinding rests there is no need to make this item as the task can be carried out on them. See photos 17 and 18  on this page. Or, page 53 in my “Tool and Cutter Sharpening” book.