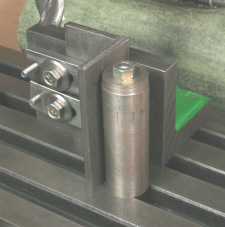 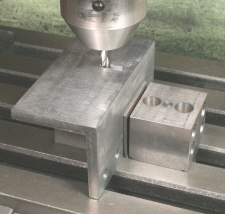 Consequently, the existing rest is removed and the new one replaced using the same fixings, but as grinding machines vary so will the fixings for the rest. Having studied quite a number of the lower priced grinders I find that many  use the same method  to secure the rest. Because of this, the method  I have used will suit most other makes, only the dimensions of one part need changing. Later though I have suggested an alternative, and time saving, method of mounting the rest.

The two angles mentioned above are the primary clearance (P) behind the cutting edge and the angle of the edge that results in the end of the cutter being concave (C). The clearance angle should be in the order of 5° but this is not crucial, if though it were increased appreciably then the edge would be finer and less strong and become blunt more quickly. The angle is achieved by the table being 6mm below the wheel's centre and with the cutter held in a 25mm square holder results in the cutter's edge being 6.5mm above the wheel's centre. This giving nominally an angle of 5° based on a 150mm diameter wheel, see the main assembly drawing.

The concave nature of the end mill is by positioning the cutter at an angle of  1 to 2°  relative to the wheel and is achieved by setting the body (4) to this value. Whilst it is essential that the end is concave, precision is not required and lines scribed onto the rest  give an adequate guide for setting up the angle.

Not only is it essential that all four edges are sharpened to the same level but also that the amount being ground  off can be controlled to the minimum necessary to remove the blunt edges. In achieving this the life of the cutter will be increased  by allowing it to be sharpened a number of times. Because of this the device provides a stop that

This is a simple part but I have on the drawing suggested an alternative size for the angle to that which I have used and which the reader may like to consider using. When using the 50mm wide angle the cutter holder (1) projects beyond the edge of the table though there is sufficient support for it to stay there unaided. Because of this 60mm wide angle could be used but is by no means essential. It will though be necessary to use black angle and machine the working face.

Photograph 2 shows how I set up the angle for machining the ends but this is not essential and leaving them as sawn  would be a time saver. Photograph 3 shows the slot being made. Drill the two holes B but leave hole C till after the support has been made.