Next, the part would be turned end on end and the parallel portion, A, just turned, held in the four jaw and the steady set as before and the end of the material centre drilled. With the steady removed and the part supported by the tailstock centre, all the outer diameters would then be turned including the thread, Photograph 4.  The part can be temporarily removed for testing the taper but will need skimming on all diameters when it is returned. Should the viewer like some detail on a method of turning tapers that should be accurate enough to avoid the testing stage, see my page on the subject. Following this, the steady is fitted and adjusted to support the diameter C, doing this whilst the tailstock centre is still engaged, Photograph 5. In this situation, some steadies can be opened up enabling it to be fitted without the need to temporarily remove the tailstock centre, Photograph 6. With that done the centre can be removed and the bore made, Photograph 7.

Above, I illustrated that some steadies may be able to be opened to permit it to be fitted more easily in some cases. However, it use is not limited to that and on occasions a part can be removed for some purpose then returned knowing that it would be in the same position as when removed. In cases where this facility is not available it may be possible to just lift the top arm to permit the part to be removed with the arm being reset when it is returned.

Used as an alternative method.

The above are examples where a fixed steady is almost essential, but there are situations where using a fixed steady is not the obvious choice but would be advantageous if used. Typically, if a need arises for a few simple parts, such as bushes, washers, etc., then placing a short length of metal in the three jaw, turning and repeatedly parting off, would appear to be the obvious method. Eventually though, a stub will remain in the chuck that will have to be consigned to the “may find a use” box, maybe a number of stubs if a larger number of parts are to be made. To avoid this, a longer length of metal can be placed in the chuck and supported towards its end enabling a few items to be easily made.  Also, if more are required then the steady can be moved closer to the chuck and further parts produced. Photograph 2 showed an example were some bushes were being made. 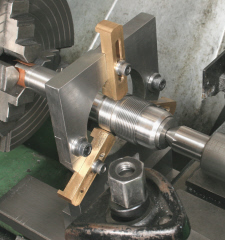 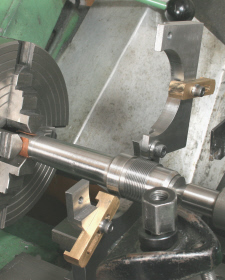 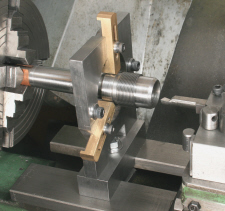