Whilst steadies are often excluded when a lathe is purchased they are in most workshops an essential item, especially the fixed steady.

Having said they are an essential item it is likely that their use will be infrequent, as a result, encouraging the workshop owner to attempt to manage without one. In a few cases there may be an alternative method of making a part but eventually a task will surface for which there is no acceptable way other than to use a steady. However, it should not be overlooked that there will be occasions where using a steady will be beneficial even though it may not be the obvious method, more about that latter. What then is a fixed steady's main purpose, in a nutshell it is to support a part that is too long to be machined just being held by the lathe's chuck, three of four jaw.

The statement “three or four jaw” above has a greater significance than the newcomer to the use of the steady will anticipate. This is because in cases were the steady has to be quite close to the chuck, the workpiece will need to run much truer than the average three jaw chuck will achieve, it will therefore need to be set to run true whilst held in the four jaw. The need becoming greater the larger the diameter being supported and the nearer the steady is to the chuck. Why is this then.

Sk.1 attempts to show, very much exaggerated, the result if this requirement is not satisfied. For simplicity, the sketch has been drawn with the steady having opposing arms but the principle described will still apply with a steady having just three arms. In “A”, it shows that the chuck has an error and the workpiece axis is different to the lathe's axis. If the steady is fitted and set at “A” and the chuck then rotated 180° the workpiece will no longer align with the steadies arms ”B”. In this situation therefore something will have to bend, the lathe's headstock, the steady and or the workpiece itself. Of course all three will, though the amounts will be infinitesimal, except when the workpiece diameter is small enough to bend sufficient to accommodate the error.

With a large workpiece diameter therefore the majority of the error will have to be taken up by it being forced sideways within the chuck's jaws, “C”.  Then, when the chuck is rotated a further 180° the workpiece will again miss align  “D” and be forced to move within the chucks jaws as shown in “E”, the result of this sequence is that the workpiece has moved out of the chuck by a very small amount. 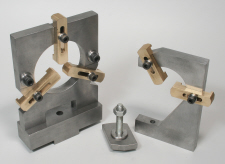