Setting up for turning a Morse Taper, or similar.

For the viewer who has an involvement in making workshop equipment then turning a precision taper is likely to be required at some time, and being unable to measure the angles involved, most will adopt a method of trial and error. Having adopted this method many times I became aware that it was far from ideal, not least because it required the part to be removed from the lathe to be tested with its mating half. Because of this I developed the following method.

Its essential feature is the ability to measure the diameter of the taper at two points a very specific distance apart and from these determine  the angle.  For a taper being turned with the smallest diameter at the tailstock end, a test piece is made having two flanges, the distance between their two trailing edges being such that the difference in their diameters must be 0.040”  If though a taper is being made with the smallest end nearest the headstock then it will be the difference in their diameters at their leading edges. Otherwise the method is the same for both situations.

Having made the test piece it can be kept and reused until the flanges have been turned away, so it is quicker for subsequent applications. Photograph 1 shows four test pieces with the smaller one being used for increasing diameters in Photograph 2.

Even with this method I found that setting the top slide can still be on the difficult side due to the need to make very small adjustments to the angle set, even so, it minimises the turn, remove, test, replace, turn, remove, test, sequence. I have though adopted an approach that reduces the problem making the task easier.

Having taken a trial cut leave the tool in contact with the larger diameter and measure the two diameters. For an example, let us assume the larger diameter is only 0.039” larger than the smaller, thus needing the angle to increase. Loosen the top slide and swing it away from the test piece, move the cross slide forward by 0.001 in. and then rotate the top slide until the tool once again touches the test piece and re-clamp the slide in place. This will have made a small and controlled increase to the angle.

Setting Up to Turn a Precision Taper. Harold Hall 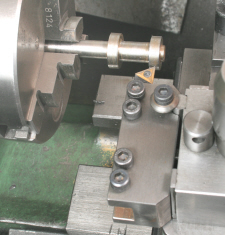