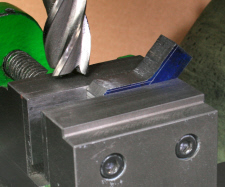 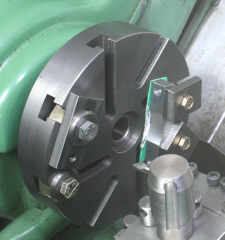 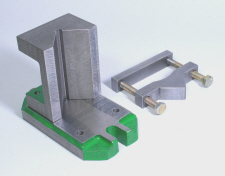 The viewer may question why, having fitted the block to the base, will it be necessary to remove and refit it, the reason being that the block can be assembled on the base with the vee both parallel with, or at right angles to, the base.

The clamp is very similar in principle to that used with the Keats in the last issue but rather than it being a casting it is machined from a piece of steel. I cut a piece to the overall dimensions and on this marked machine-to lines but to avoid the slow process of milling away all the surplus material I cut the bulk away using a metal cutting band saw. With that done, and as accuracy if far from important, I  lined up the 45° line slightly above the vice jaw, just doing this visually, and milled down to the line, Photograph 13, repeating  for the second angled face. The part was then placed in the vice with it supported on a parallel and the two remaining faces machined.

When clamping larger diameters the design calls for a shallow curved recess rather than the normal vee, for this, the part was mounted on the faceplate from  my "Four Jaw Chuck Alternative" and the recess made as illustrated in Photograph 14.

The drawings show a piece of 1/4” diameter steel bent into a U shape and threaded on its ends to complete the clamp assembly. However, I chose to make a piece of steel to go under the vee block (as does the U) and with this tapped, screws being used to provide the clamping pressure. Whilst this needs more than one length of screw, if used in the horizontal position, it would be more compact with smaller workpiece diameters,

With that done and some tidying up, chamfering corners for example, the parts were finished with a lick of paint and can be seen in Photograph 15.

Elsewhere on the site I very briefly compare the Keats and the Vee angle plate giving what I feel are their pluses and minuses and suggest some uses to which they may be put.