Photograph 23, showing the operation, may cause some confusion but having so much to remove I chose to experiment a little. First, I plunged the boring tool in a little, probably 0.5mm, and winding it out to almost 50mm. After repeating it a few times I decided that opening up the hole as one would normally do using a boring tool was the best method. However, when there is a substantial amount of metal to remove it never does any harm to experiment, typically with differing speeds and feed rates.

The next stage is to finalise the steady's shape. Mount it onto the worktable and position such that the tangent to both the small and large radii is at right angles to the front edge of the table, Photograph 24, followed by machining to the line using a small end mill, Photograph 25. Whilst on the table use the same method for removing the waste (25mm dimension) and the top angle. Note the packing under the steady to allow the cutter to pass fully through.

The next stage is to drill and tap the holes for securing the steadies arms, but not having any easy reference edge I would suggest the following. Make a drill bush as per Sk. 1 and use this with the smaller diameter in the recess and the larger diameter level with the inner radius of the frame and, using a toolmakers clamp, clamp it in this position. The clamp can then be held in the drilling vice and the tapping size hole for the fixing screw drilled, Photograph 26. The frame has to be positioned so that the drill just misses the end of the vice jaws. The advantage of the method is accuracy. For me, with the arms being a close fit in the recess and the slot made with a 5mm end mill, I was relying on the fact that the screw would be a little under size. It was very gratifying when all five arms fitted without any need for adjustment. With all the parts now completed, lightly chamfer all the edges and corners, if nothing else making them more pleasing to handle, and finally assemble.

I consider that using the rotary table is the better method being quicker to make the large holes and to position the channels for the arms. Boring the large hole on the lathe did though achieve a better finish. Even so, the method I used for the travelling steady is perfectly acceptable for the workshop without a rotary table and can easily be adapted for both steadies.

Elsewhere  on the site I explain how these very useful items are used. 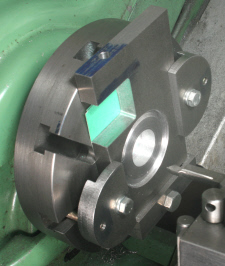 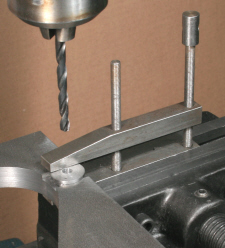