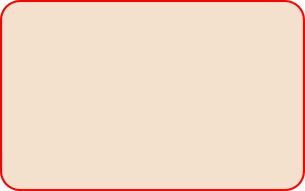 Mount an angle plate onto the faceplate and the soleplate base onto this and  adjust the end flange to run true. Check also that casting’s sides are at 90° to the faceplate ensuring that the bore will be axially in line. Balance the assembly, turn the outer diameter, face the flange and make the bore, Photograph 77.

If like me you are using a very small faceplate you may not be able to find room for a robust enough angle plate to support the casting. My way round this was to take a block of steel and tap the edge to provide a method for fixing it to the faceplate and a tapped hole in the side for securing the casting to it. This can be seen in the photograph.

The next operation is to drill the five holes in the flange using the cylinder cover (6) as a template for positioning these, see Photograph 78. Note that the explanations for the 10H parts are somewhat brief and therefore the 10V descriptions for the similar operations should also be read.

Mount a small angle plate on the top slide and the casting onto this and with a milling cutter held in an adaptor in the three jaw chuck machine the two lower crankshaft bearing faces. Lock both the top slide and saddle and turn the casting round so as to enable the other two faces to be machined at the same level, Photograph 79.

I approached the next operation thinking that I would just repeat the method  I had used for the 10V, unfortunately, the greater length of the casting prevented this. I needed another method therefore to produce the 7/16” aperture to take the crankshaft bearings. I did not have a 7/16” end mill to make the aperture and would be reluctant to use a new high speed cutter on a casting even if I then purchased one.

I hit on an idea that I had never used before, that being to use a carbide tipped boring tool and to fit it into the four jaw chuck so that I could set it off centre to adjust the width of the cut made to 7/16”. The cutter  chosen  actually made a 7/16” cut so that it could be used in the three jaw making it even easier. It’s an idea that I will certainly remember for the future.

Still this was the easy bit and I needed to find a method of presenting the casting to the cutter in the correct position, the problem being that I needed  to use the three axis of a conventional milling machine. I had the cross slide that would traverse the part to make the cut, the saddle to control the depth but I needed a method of setting the height of the casting. The following was the method I adopted and it worked well.

Mount an angle plate onto the top slide and a small vice on this ensuring that its fixed jaw is horizontal. Next, fix a piece of rectangular steel to the rear of the casting making sure that it is at right angles to the side of the casting and hold the assembly in the vice on the top slide.

Offer the cutter to the bearing supports and if too high then move the bar on the rear of the casting as it needs at this stage to be a little lower than required. With the bar in its new position estimate how much the soleplate is  too low and with a piece (or pieces) of packing place this on the fixed jaw so as to raise the casting.  Add or remove a little from the pack until the cutter is visually central  between the bearing supports, visually will be sufficiently accurate. Photograph 80 shows the set up and clearly indicates the packing between the fixed jaw and the bar on the rear of the casting. 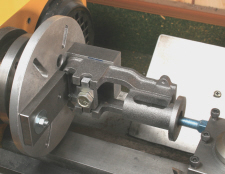 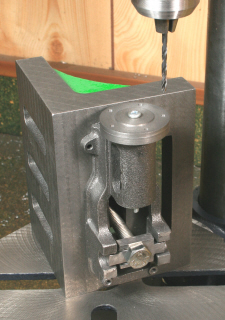 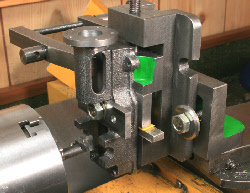