Photograph 21, shows a large disk being held using the "thin piece larger diameter clamps" (6) I have though since making my clamps increased the length given on the drawing by 3mm so as to increase the depth of the jaw available for griping the workpiece. Actually, to avoid having to make another set of jaws I intend to slot the fixings to achieve a greater depth and it occurs to me that this may not be a bad idea as it will permit the clamps to be adjusted to suit the thickness of the part being held.

Photograph 22 shows a more complex set up and is included just to highlight the fact that the system allows a mix of clamping methods. The viewer may though consider that this would be better done on the faceplate and this maybe so. However, the illustrated method does permit fine adjustments to be easily made to the workpiece's position that would not be so readily achieved if mounted on the faceplate.

Small diameters and squares also small disks are also catered for but I have not included any photographs of these set-ups,   I have though included Photograph 24 that shows the parts that are required for these situations. On the left is the jaw attachment that is used for small diameters and squares and on the right a support for small disks that are too small to use the set-up in photograph 21. Do when using the latter only use the outer clamp screw for securing the workpiece.

Comparisons with a four jaw chuck

I would not be big headed enough to claim that this device wins in all aspects compared to using a four jaw chuck but I do consider that overall it has many more pluses than minuses.

On the minus side I can only suggest that in a few cases it takes a little more time to initially set up and  in a very few cases also be a little more difficult to finally set-up the workpiece's position, though this latter problem may work to one's advantage in a few situations as explained below. 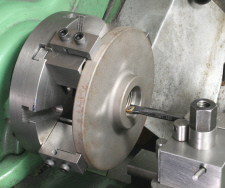 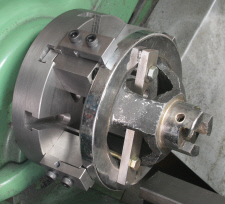 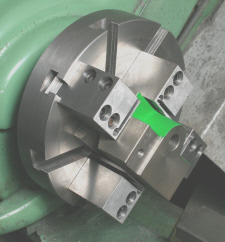