After machining the recess and drilling the holes the part can be slotted using the same set-up as the jaws, in this case the angle plate also serves to set the part upright when being clamped into the vice, Photograph 16.

This is a simple part and will just show my method of chamfering the edges that avoid the need to use a tilting vice. In this, a small V block is placed between the vice's jaws and the part laid in one of the V's making it easy to hold and machine the chamfer as can be seen in Photograph 17.

Remaining parts (3, 4 and 7) are simple and need no explanation.

With all the parts now made all that needs doing is to double check that everything goes together as intended and with that done the body can be returned to the lathe and its face given a very light skim to remove the scribed marks and the marking blue. Having done that there is just one last machining operation to be done on the body and that is to make the shallow bore to take the setting pin (7) making it a close fit on the pin already made. The complete set of parts is seen in Photograph 18.

The examples that follow are just mock ups with whatever came to hand but I think give an indication of what can be achieved with this workshop item.

In most cases it will be preferable to set each jaw the correct distance from the setting pin to suit the size of the part to be held. Precision is not necessary as the jaws in built adjustment will permit the position to be final set when in place on the lathe. If the viewer possesses slip gauges then these could be used though they are far more accurate then is required for the task. A good alternative would be to use a bore diameter gauge, having been set using a micrometer, as is illustrated in Photograph 19, even a rule and a traditional pair of inside calipers would suffice if used with care. An alternative would be to fit two adjacent jaws and position these using a digital caliper. Then, adding the other two jaws and setting each opposing pair by taking the dimension between the jaws.

With the jaws set the device can be fitted to the machine and the workpiece then added, finally set and machined. Photograph 20 shows a 75mm diameter piece of steel 200mm long being machined at a depth of 4mm, an operation that it did with ease. 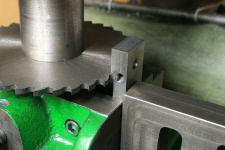 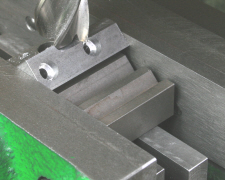 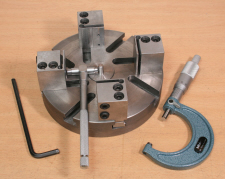 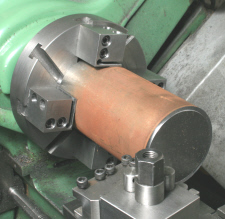