Mark out and drill the holes, Photograph 6. As the holes C on the bottom frame are the same distance apart, mark them out whilst the surface/height gauge is still set. Follow this by drilling and tapping the part.

This is a simple part and needs no manufacturing detail. However, make it at this stage as it is required for the next.

You will need a rotary table of at least 150mm diameter to use the following method otherwise it will be necessary to use the method I suggest for the travelling steady .

I obviously had changes in my thoughts regarding the setups in the next three photographs so please treat them as typical rather than being the exact way to proceed. With a centre in the machine spindle, centralise the rotary table, Photograph 8,  fasten in place, also locking both table axis. Next,centralise the assembly ,Photograph 9 and secure it using the method shown in Photograph 10. Using this method of securing the assembly, rather than that shown in photograph 9, permits the assembly to be mounted so that the cap head screws can be placed head up enabling both the bore, and the groves for the steadies arms to be made at the same setting. 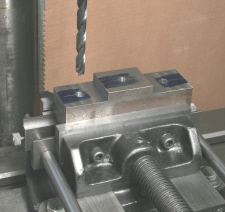 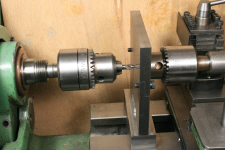 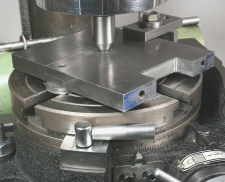 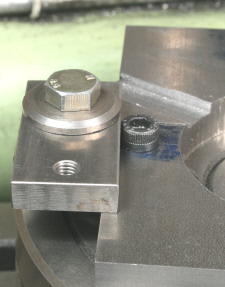 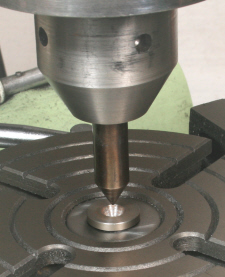