All electric motors work on the principle of one magnetic field being attracted to, or repelled from, another. The two fields being the stator/field (stationary) and the rotor/armature the rotating part. Whilst there are for commonly used motors small variations there is only one major difference, that is the way that the magnetic field in the rotating part receives its energy.

Most will be aware of the commutator, with brushes, that passes power to the armature. This being the term used for the rotating part of this type of motor, typically, as used in the average power tool. In the larger AC motors, such as power our machine tools, it will be found there is no means of directly powering the rotating part, called a rotor in this type of motor.

Going into the theory would be involved and not really appropriate, even so, attempting to give an insight will not be out of place. The changing field strength produced in the stator by its windings being connected to the AC supply, induces a voltage into the rotor windings, rather like in a transformer. The ends of the rotor windings are though connected together so current flows producing its own magnetic field. Because of this, the motors are known as "induction motors" but also sometimes as "squirrel cage" motors because the rotors interconnected windings form an assembly rather like a cage. Not having a commutator, these motors are preferred as maintenance requirements are minimal.

A two-pole motor having a pole on opposite sides of the stator produces a single field between them. The rotor will make one full revolution through this field for each cycle of the supply. Speed will therefore be for a 50 Hertz supply 3000 rpm (50 Hertz x 60 seconds).

These speeds are though not strictly correct as the motor needs to run a little slower for it to work, the difference being known as the slip speed. Another advantage of this type of motor is that the slip speed needs to change very little between no load and full load, and has as a result essentially a fixed speed, unaffected by load.

These work quite differently as both the stator, known as the field, and armature receive power directly from the power source. Whilst this type of motor works well on both AC and DC supplies, some even being labelled as such, they are more easily considered in terms of a DC supplied motor, even though at the end I will say the AC motor works in exactly the same way.

These motors are mostly connected in one of three configurations, Shunt, Series or Compound, as shown in Sk 40. Sketch A shows that the field winding for a shunt wound motor is connected directly to the supply, therefore having a fixed value. Sketch B shows the field in series with the armature, resulting in the field strength varying as the mechanical load demands more or less current. Sketch C shows a motor with both shunt and series windings resulting in a characteristic that is a combination of the two. 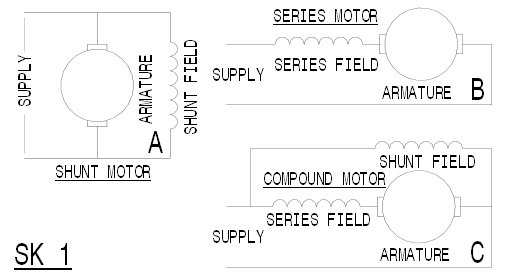 As the title says the content of these pages only cover the subject at a basic level. They should though help with fault finding and other web sites and magazine articles having an electric motor content. If you would like to go beyond that I list on the last page some web sites and books that may be of help.