As the title says the content of these pages only cover the subject at a basic level. They should though help with fault finding and designing simple control systems. Also, understanding other web sites and magazine articles having an electrical content. If you would like to go beyond that I list on the last page some web sites and books that may be of help.

Logic in electrical circuits is far from a new subject being almost as old as electrical generation itself, commencing when the first relays were made. However, the need for more complex systems and then even more complex systems, logic has become very much an electronic function. Even so, relays are still appropriate for simpler systems. Logic sequences are built up using just two states, off and on. This though is a slightly inaccurate statement as in electronic logic off will be a low voltage rather than zero.

In relay logic the terms on and off, energised and de-energised, closed and open have been used. In electronic logic though the terms are naught (0) or false in place of off and one (1) or true in place of on, for simplicity I will use only 0 and 1. The two main logic expressions are "AND" and "OR", these are easily understood in relay terms as Sk 1 A (AND) and B (OR) illustrate. In A, contacts X and Y have to be closed for the relay to be energised but only X or Y in the case of B. 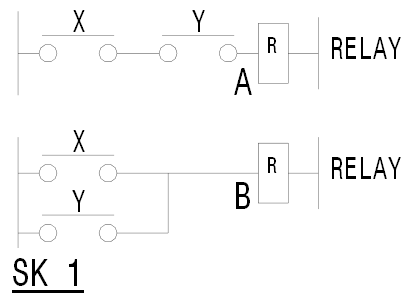 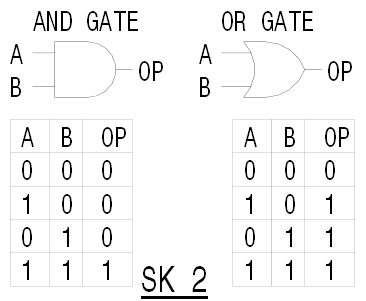 Other forms are "Nand" and "Nor" being similar except that their outputs are inverted, typically for a two input "Nand", with a 1 on both inputs the output will be a 0, see Sk 3, compare this with Sk 2.Note also the difference in the symbol used. Also there is an "Exclusive-OR". This will give a 1 at the output only if there is a 1 on either A or B but not both, Sk 4. 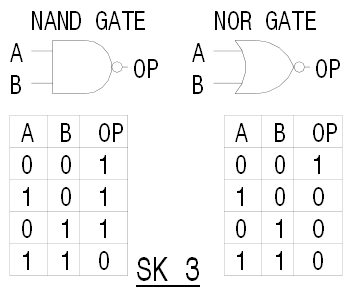 In the early days of electronic logic, circuits would be constructed using individual transistors, present day they are almost all in the form of integrated circuits. The common ones are "And" and "OR" gates and come with two or more inputs and a single output. Typically, an "And" gate with two inputs would require a 1 on A and B inputs for the output to be a 1. An "OR" gate would only require a 1 on either A or B input, or both, for the output to be a 1. Sk 2 shows 2-input "AND" and "OR" gates with charts showing their input/output relationships.