Having made and used the grinding rest, originally appearing in issue 89 of the Model Engineers' Workshop magazine and then in the Workshop Practices series book Milling a Complete Course number 35, I found that it was capable of producing excellent results. However, like many machines intended for sharpening a wide range of engineering cutters, it was in some cases time consuming to set up, once set up is was quick and easy to use. The biggest, and only real problem, was initially placing the rest in the best position on the base board.

Having seen magnetic bases being offered at a reasonable price I hit on the idea of using two to secure it on a piece of sheet steel fixed to the base board. This enabled the rest to be quickly and easily placed in precisely the best position and simplified its use appreciably.  The sheet of steel should be 1.5mm thick minimum and in addition to fixings at the corners, some also towards the centre to give it added strength, making the rest more ridged as it will considerably reduce the amount the plate flexes. The pictures should make the fixing clear.  Thicker plate would be preferable but any thicker than 3mm would be of little benefit.

The photographs also show that the rests are secured using the existing slots in the  rest so no modifications are required to the rest itself. This also allows the position of the bases to be varied from just at the ends as the photograph of the dovetail cutter being sharpened shows.

Ideally, the bases should be spaced off the rest with some non magnetic material avoiding the rest siphoning off some of the magnetic field.

One modification to the rest itself that is worth making is to reduce the thickness of the side arms from 8 mm as drawn to 3mm. This makes them more flexible and makes a secure hold much easier to obtain, see the photograph. For more details of this and two other simple worthwhile modifications, see this page.

The simpler rest, seen in the photographs, that was originally published in issue 109 of the magazine and then included in WSP book Tool and Cutter Sharpening number 38, would also benefit from having the magnetic bases added. 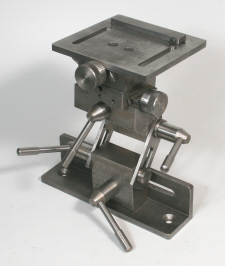 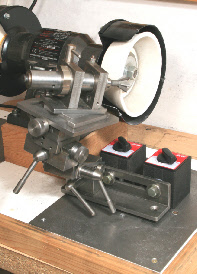 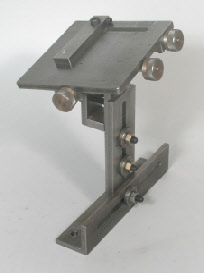 Note the thinner side arms