Making a skeleton clock was a major task for me and wanted to minimise the time taken on the project. Included in this was not to spend time on workshop equipment that would likely only be used just the once.

When cutting clock pinions, the most common setup, if I am correct, is to support the outer end with a form of tailstock, this would take some time to make so rejected the idea. Another method I had seen was to place a support behind the pinion to help take the machining force. Again I did not go with the idea as the support would need resetting as the already cut teeth reached the rear of the pinion blank.

I did though realise that if the steady was curved to match the pinions diameter, resetting would not be necessary, from that the idea shown in Photo 1 surfaced.  A few minutes to drill a close fitting hole in a scrap of steel and I was in business. I didn't even have to cut the slot in the side of the support as this was cut when cutting the first tooth space.  Photo 2 shows the complete setup and using my basic dividing head.

For the clock maker who would like to make a largish number of pinions to hold in stock then a second support, perhaps a third or more, spaced off the angle plate, would enable longer lengths to be machined.

Having cut the teeth on a single blank, sufficient for 6 pinions, I was left with the task of dividing it to make single pinions, drilling  them for the arbors and turning the ends on some to be a close fit in the holes in the wheels in which they were to fit.

The first task was to divide the blank into portions long enough for the pinions to be made. Obviously, the first choice for holding them when parting off was to use a collet. However, whilst I make a lot of use of ER collets on my lathe I find that when closing them down to a size much smaller than their maximum the closing force increases and it is a little difficult to determine when a proper grip is achieved.

I was therefore reluctant, perhaps unnecessarily, to hold the blank on its teeth, as too high a grip, or too little and they slip, may result in damaged teeth and a start again situation. Obviously not what I would like.As the projection from the collet would not be that great I decided to hold it on the unmachined portion and with a  narrow parting off tool very very carefully part off the blanks.

I was now faced with very short lengths needing  their ends faced, drilled for the arbor's diameter, and in some cases, turned with a spigot to enter closely into a hole in its mating wheel. The idea of gripping such short pinions using a collet did not appeal, even less than the longer blank if parting off.  I decided therefore that using the lathes three jaw fitted with soft jaws would be a much better method.

Being soft, the jaws would deform very slightly around the teeth ensuring a secure hold with much less force.  Also, having machined the jaws whilst on the lathe, Photo 3, concentricity would be assured.

Even with only a length of around 5mm to grip in most cases, the method worked well and I was very pleased with the result. Photo 4 shows a pinion being drilled for its arbor.

I worked without soft jaws for very many years and now realise just how big a mistake this was as so many tasks that would have bordered on the impossible are now carried out with ease. Even if you are not into clock making, I cannot stress more highly that soft jaws should be a standard item in the vast majority of workshops. If you are new to using soft jaws then you may like to view my pages on their use.. 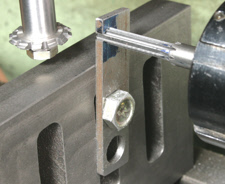 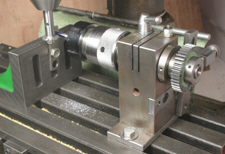 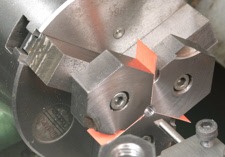 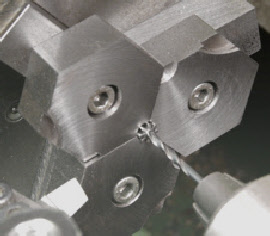