Before studying this item in depth I would suggest that you look at my web pages on the benefits of the toolmakers style vice. This details my thoughts on using a toolmakers style vice as a milling vice, and describes how they can provide a greater workpiece capacity, particularly for, but not only to, the small machine user. Likewise, for the viewer who carries out milling on the lathe, either on the cross slide or vertical slide. Viewing the item is not though essential for carrying out the re-machining of the budget drilling vices seen in Photo 1.

Details of the vices I am using, and suggestions for possible alternatives if your location makes these difficult to obtain, are given at the end.  Their sizes though are 40, 64, 80  and 100mm jaw nominal widths, opening to similar values.

In upgrading these  to approach those of a Toolmakers Vice we are attempting to achieve an accurate result, at least as far as can reasonably be accomplished in the home workshop. This will not of course be equal to that of an commercial  version.

I.  The face on which the jaw moves, being the one on which the workpiece will often be located, sometimes using parallels, to be parallel to the base of the vice.

2. The jaw faces to be at right angles (upright) to the face on which the moving jaw slides.

3. The top of the vice's fixed and moving jaws to be parallel to the base of the vice.

4. Clamping grooves to be included on each side.

5. The jaw keep plate removed and a longer more robust one fitted.

Optional Features(either all or non)

6. The two long sides of the vice to be vertically at right angles to the vice's base.

7. The two long sides to be parallel

8. The fixed jaw face to be at right angles to the vice's long sides.

If omitting the optional features some faces would be left in the condition as received as a result they could not be used as reference surfaces for positioning the vice on the machine table, or positioning the workpiece in the vice. Unless the reader needs to limit the work involved I think the full update is the ideal approach and my descriptions are based on the vices being fully machined. There is though one other factor that must be considered.

As the above will require, both the top surface of the rail on which jaw moves and the jaw under surface which slides on this, to be machined, this will lower the bore in the moving jaw that accepts the end of the tightening screw. The result will be an alignment error between it and the threaded hole in the back end of the vice's main body.

If the amount removed is kept to a minimum the misalignment may be accommodated by the clearance between the end of the screw and the hole in the jaw, also, the clearance between the screw and the thread in the rear upright. In fact, one vice that initially became tight when attempting to open it fully, worked perfectly once the surfaces were machined. This showing that being budget vices errors of alignment may already exist. Should the two surfaces need more removing than can be accommodated by the clearances present then I detail later a method as to how this can be worked around. 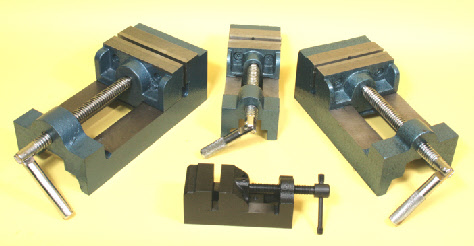 Having written an article on the benefits of the Toolmakers style of vice I was aware that these advantages were severally limited due to them only being available in the smaller sizes. Have a look here which shows in photographs 4 and 5 how the toolmakers vice (4) can be raised and lowered on the vertical slide to position the workpiece relative to the cutter, leaving the vertical slide to provide the traverse for the machining required. This facility is certainly not available with the small vice in photograph 5 being limited to just two positions on the slide.

As a means of overcoming the limitations due to  smaller sizes only being available, I chose to provide this article explaining how to modify some drilling vices as the style of these would enable them to  get close to style and accuracy of the commercial toolmakers vices available and also in larger sizes than those that can be purchased.