The understandable desire of the workshop owner to make immediate progress on the job in hand means that pausing to make a useful item, such as a drilling jig, is all too often a task that is bypassed. What then are the purposes and benefits of a temporary halt to the project?

Putting the reasons for making a drilling jig in a nut shell they are. Ease of carrying out the task in hand. Increased productivity, especially where a batch of parts is to be made. Consistency of the parts for which the jig is being used, and. Greater accuracy! Of course, in many cases a component will benefit by more than one of the above conditions where a jig has been made and used. Let us consider therefore what is probably the simplest jig possible and one that gives all the above benefits.

Consider the need to make a fairly common component as that shown in Sk. 1. It can be seen that this is a split collar intended to be clamped onto a spindle and having machined the recess, it must be drilled and tapped to take the cap screw for clamping the part. However, with the limited access to the recess marking out the position is far from easy but with a simple bush that fits into the recess there is no problem, see Photograph 1. Once the hole has been started the bush can be removed for completing the hole. This simple device satisfies all the above reasons for making a jig as the following explains.

1 With making the drill bush taking only a couple of minutes it is certainly easier than attempting to mark out the position of the hole, even for a single item.

2 If a batch of parts is to be made then the time taken to carry out the process would without doubt be reduced.

3 With more than one part being made a consistent result would certainly be achieved.

4 With the bush having been made a close fit in the recess a high degree of accuracy would result, even for a single component.

Photograph 2 shows a similar but more complex task where a hole needed sighting in a split bush and in line with a hole in the frame into which it is to be fitted. Photograph 3 shows the reason for the requirement. 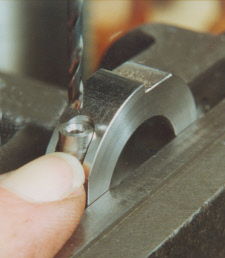 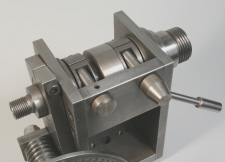