A major portion of this project is in making the base and its associated clamping mechanisms and therefore, if the intention is to provide oneself with just a small number of holders, most workshop owners will I think opt for buying them on the basis that the cost saving does not warrant the time being required by the task. However, if  a larger number of holders is envisaged it becomes worthwhile as when set up for the task holders can be made very quickly. If, like me, you intend to make say ten or more holders than the financial saving will be considerable. You will also have been involved in an interesting project, which some may consider makes even making a smaller number worthwhile.

The design I created for these holders  was specifically chosen to minimise the need for precision and similarly, milling operations, as a result the holders are quite different to those available commercially.

The top photo shows a holder partially fitted to the base, from which it can be seen how the round  key  mates with a semi circular groove in the holder. This explanation is though an oversimplification.

Ideally, the key should be an exact fit in the grove in the holder but even for a commercially made unit tolerances would have to be placed on their sizes and therefore an exact fit would frequently not result. If the groove in the holder was in some cases minutely smaller than the key the two parts would grip one another when clamped together, making it difficult to remove the holder after use. To avoid this the key has to be  smaller than the groove in the holder. We are of course only talking very small differences, ideally no more than minus 0.01mm to minus 0.02mm on their diameters.

Because of the difference the two parts would mate as per SK. 1 A and location would be poor. If though a flat is machined on the curved surface then location changes from a single line of  contact to two. As the two mating surfaces have a large length to width ratio location is very precise,  probably better than the dovetail method frequently used that results in a much smaller length to width ratio, probably no better than 1:1. The sketch of course shows the situation very much exaggerated. 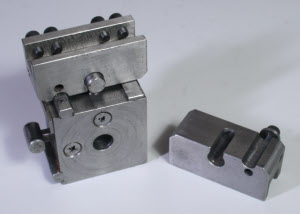 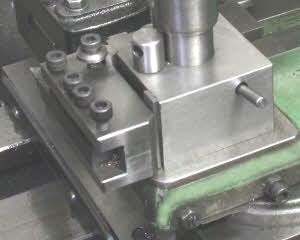 I have modified, slightly, the design for my Quick Change Lathe Tool Holder and improved some of the methods used for making it, resulting in a slightly improved version. However, as some may be partway through making the initial version I have retained it on the website so that the drawings are still available. If my comments produces doubts as to the original then take note that I have been using mine almost

exclusively over the last 20 years with satisfactory results.

If you are returning to the page, having book marked it, now with the intention of making a set, then I would suggest that you work to my latest version found here. Another advantage is that the manufacturing methods are given in very much more detail.