The casting used for this project was obtained from Woking Precision, a firm that has now been taken over by Hemingway Kits but is not listed it in their catalogue at this time but may still have some stock obtained from Woking Precision. If however, a casting is not available, or the viewer has no interest in making a small vice, the operations shown may still provide useful information for those who carry out milling operations on the lathe.

Whilst there are other suppliers of castings for making a small machine vice non to my knowledge are similar to the one in this project. However, I have illustrated later a vice from The College Engineering Supply that would make a small Toolmakers style vice and for which many of the operations shown would still be appropriate.

As Toolmakers vices are much easier to position they are in my estimation much more suitable for use on the limited space of a lathes cross or vertical slide than one having fixings such as that seen in these pages. A major advantage of this also is that a toolmakers style vice can be much larger than other types enabling larger workpieces to be held. Photograph 1 shows a typical example.

The photographs that were taken when the vice was first made are no longer available. Because of this, the photographs that follow have all been taken with the parts that have already been made and finished. Do take note of this fact when studying them for each  task being illustrated as some show latter operations already completed. 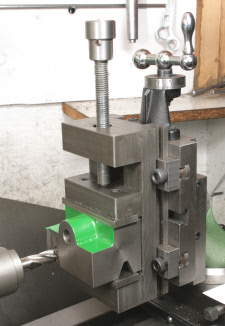 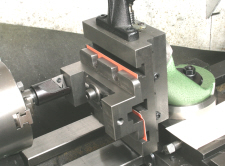 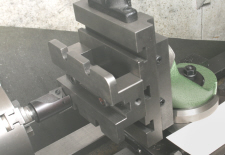