I made two rotary tables from castings that were commercially available but found that the T-slots called for did not line up with standard  that were available. I have though realised since that possibly it was the intention that Woodruff cutters should be used as these were available with dimensions that were quite close. However, I chose to make my own and were very pleased with the results. Having made the cutters and hardened them and then finding that they worked perfectly was very satisfying.  By so doing I had raised my confidence level regarding hardening cutting tools and if nothing else it had been a worthwhile exercise.

To minimise material wastage, carry out the turning operations between centres, as this will avoid a small stub that would be destined for the scrap bin, if held in the chuck. This would not be ideal even if only mild steel but with silver steel being more expensive, definitely the way to proceed.

If though your lathe spindle is bored large enough to take the material being used then you can consider using the chuck. Even so, I still would recommend producing the cutter between centres as this is the only way of achieving total concentricity between the cutter head and its shank.

Cut a length of material and face and centre drill each end whilst mounted in the three-jaw chuck. Use a small centre drill and then only made a very small tapered portion, as I consider that the pilot portion of the drill may weaken the waist behind the cutter when hardened.

If a threaded shank cutter is being made it is imperative that the driving dog does not slip so a small flat should be filed on the head end for the driving dog screw to bear. This flat will eventually be removed by the action of cutting the teeth. Now reduce the material to the shank diameter required and produced the thread. Photograph 1. Of course, if you use milling cutters with plain shanks then the thread  is not required.

Next, with the cutter removed, reversed, and between centres, turn the waist,  also the cutter head to the diameter and width required, Photograph 2. You must at least, skim the outer diameter to ensure that it is concentric with the shank.  Commercially available cutters are made slightly oversize in terms of diameter to allow for sharpening a number of times whilst still producing a slot large enough to take the width of the tee nut. 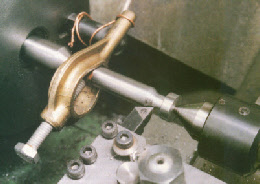 Not now having the photographs used in the original article those on these pages have been scanned from the magazine and are now of poor quality. Because of this there are no large size pictures provided.