Having suggested that the viewer may like to modify a larger version, I obtained the 4" (actually 4 1/4" opening to 4") vice and modified this as shown in Photographs 8 and 9.

The vice as received was very similar to the smaller one featured in this article, substantial casting, quite well made, but an extremely poor jaw keep plate and no thrust ball in the closing mechanism, etc. Also, the paint finish was much superior to that on the smaller vice but unfortunately this covered up the fact that the sides were not ground. I therefore skimmed the sides at the same time as producing the fixing groves. The result for me was a vice, larger than any I had, particularly a deeper jaw depth, and one that I will find very useful. Carrying out the work on the milling machine meant that it was actually an easier and quicker task than it had been for the smaller vice.

Having completed the modification, I tested it for jaw lift by gripping a 6 mm x  25 mm  rectangular bar using the top of the jaws to grip the part, lift was almost imperceptible, well under 1 thou.

For me, one of the advantages of a toolmakers vice is the method of securing it to the machine table, giving the vice considerable flexibility in where it can be mounted. The clamps do have to be made by the user but this is a major factor in it being mountable in a range of situations as they can be made in different sizes. Do also see my pages on the benefits of the toolmakers vice.

They are particularly useful when being considered for use on the vertical slide as the compact clamping method permits much larger vices to be used. Perhaps, even more beneficial, is the fact that the vice can be slid up and down the slide making it far easier to get the workpiece in the best position and leaving less for the slide itself to do. It can also easily be mounted across the vertical slide. To consider these comments see Photograph 7.

Photograph 9 showing the keep plate of the larger vice also showed a  smaller one. This is the smallest of the range which I have updated. Photograph 10 shows how this can easily be mounted on a 100mm rotary table.

The vice I have machined for this project I have also used on my largish mill drill where it did not look out of place, size wise. However, having machined the larger one, I now use that most of the time. Interestingly, it has a slightly larger capacity than the commercial vice seen along side it in Photograph 11, which as can be seen is far too large for my machine. 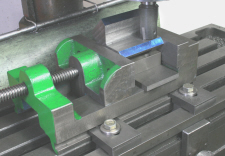 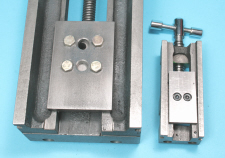 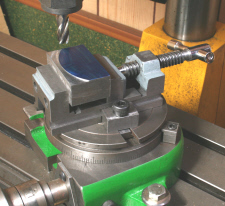