It was a chance hit on a metal working forum that prompted me to produce this. In it, a correspondent had purchased a milling machine, together with the usual accessories, drill chuck, tilting vice and a face cutter and as cash remaining was limited, enquired if one of the clamping kits was really worth purchasing, no doubt thinking in terms of that seen in Photograph 1. Many of those who replied suggested that a milling machine vice would be a better buy, whilst one said save your money and make them yourself. The two suggestions together I think being the correct advice.

For my part though, I felt that the replies left much unsaid and that if money really was limited a milling cutter chuck was far more important than a vice, as most work can be done without one, and certainly more important than a clamping kit. However, I visited the forum a number of times to catch up on the answers being given and considered that it would be worthwhile putting together some thoughts on the subject of workpiece clamping.

I have frequently described items being made that show the angle plate, or the machine table itself, being far more used than the vice, in some cases,  rarely. It would though be false economy to attempt permanently to do without one. Unfortunately, milling vices are expensive and often more robust than the average home workshop needs. However, there is no other option unless you purchase a drilling machine vice, one or two of which are suitable for very light duty milling as seen here.  Do take care though in your choice as the majority of drilling machine vices are totally inadequate for milling duties.

The advantage of using a vice is speed of clamping, even so, placing the vice with it jaws perfectly in line with the table's axis can be a time consuming task and a deterrent from adopting this approach if for a one off component. It has also advantages when very small components need to be held as these can be a problem when other methods are considered.

A major disadvantage when machining a number of identical parts is the problem of getting subsequent parts in the same position as the first so that when using the table stops, or working to the same dial readings, all parts will be dimensionally the same. However, this is often easily achieved by adding a fence, or two, to the angle plate or the machine table direct. Attachments for adding to the vice are available to assist in positioning parts but I suspect they will not meet the need in many instances and may be difficult to find for some vices. 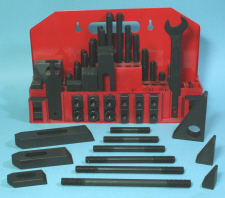