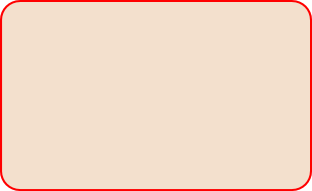 In some cases the faceplate alone will not be able to carry the workpiece and a small angle plate will be fitted onto which it can then be fitted. Sometimes, the assembly will be complex and will need careful consideration of the method of securing  the workpiece to the angle plate and the angle plate to the faceplate. For a simple example, see Photograph 10. This clearly shows the advantages where space is limited of the clamping devices mentioned earlier.

As an alternative to using an angle plate two or more square or round posts can often be fitted to the faceplatee and the workpiece clamped to these. For precision work, the  essential requirement is that the base of the post is exactly square with the post's side.

Whilst called an angle plate this is something very different from a conventional angle plate and can be used for a multitude of purposes, its most simple mode being to carry diameters that are too large for the available chucks. At this level it is one of the simpler tasks carried out on the faceplate as can be seen in Photograph 11. It can also be used for square, or in some cases, rectangular material. Instinctively, the reader will visualise the bar being set up to run true as shown in Photograph 12 (more about the method shown later) but can of course be easily set off centre for turning eccentric diameters.

The use of adhesive to secure the workpiece is a method often used though not normally to the lathes faceplate itself for a number of reasons. Firstly, it is a method best used with small components and the hole in the centre of the faceplate makes this impractical. Also, even where larger parts are to be mounted in this way the slots intended for the fixing screws limit the area available to apply the adhesive. Another consideration is that many of the methods used need the assembly to be heated and heating up a large faceplate for a relatively small part is quite impracticable.

Photograph 13 shows a small shop made faceplate that is mounted in the three jaw, using a spigot on the back. To avoid having to machine away a substantial amount of material to produce this it is made in two parts with the spigot being screwed and riveted into the plate itself. See Sk. 2 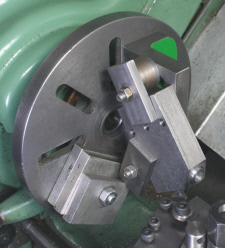 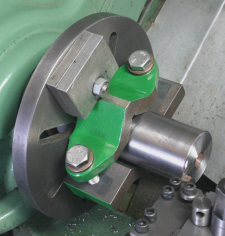 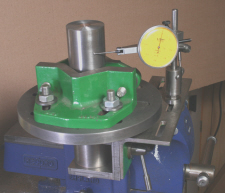 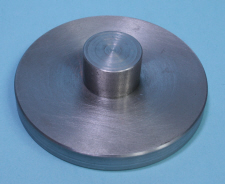