Sometimes the workpiece will already have a machined bore or spigot and a DTI will be used for checking that these are running true. In other cases, one or more bores will have to be made and positioned, very precisely in some cases, relative to some other aspect of the item being machined, or to each other. This requirement is where toolmaker's buttons come into use.

A typical application would be to set two buttons to define the centres for a pair of gears.  Photograph 2 shows the first button being set to run true which will then be removed and the first bore made, Photograph 3. The workpiece would then be moved and the operation repeated for the second button thus ensuring that the required centre distance has been achieved.

Quite often a bore, or other feature, will need to be accurately positioned in relation to a particular edge of the workpiece that, if straight, can be located against a fence placed onto the faceplate. This is particularly beneficial if a number of identical parts are being made. An easy way to position a fence in this way is to place the lathe's centre into its mandrel and space the fence from this using slip gauges or a vernier caliper Photograph 4. The space will of course be equal to the height of the bore from its edge minus half the diameter of the centre being used. Photograph 5 shows where one of a pair of bearing blocks is being bored using the fence to locate them.

A rather more interesting version of this is seen in Photograph 6 where two fences are being positioned. This is a method I often use when having to support a round component on the milling machine rather than using a V block. The spacing is not critical only that the two faces are parallel, to do this, the spacers used at the end were equal to the diameter of the lathe's centre. Photograph 7 shows the round workpiece positioned on the fences. 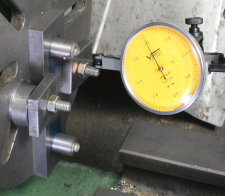 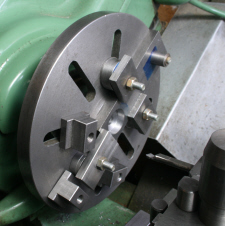 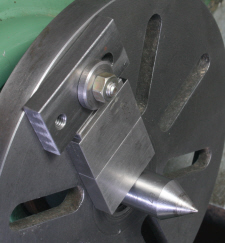 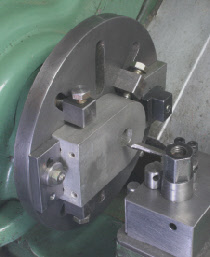 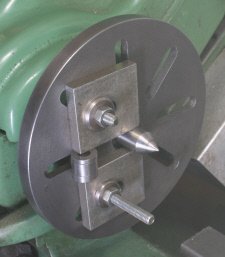 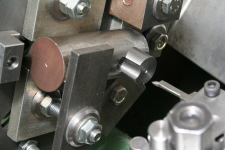