The need for accuracy with this bore is theoretically dependant on the item being machined. If a backplate for a three jaw chuck, or the body of a collet chuck, then a very close sliding fit is all but essential, if though it is a faceplate then the need for accuracy is somewhat reduced. Even here though, you may find the need to temporarily remove the faceplate with its workpiece later requiring it to return precisely for machining to continue.

Finally at this stage, fit a facing tool and lightly machine the outer face. The face should not be machined again and if eventually slightly damaged in use any raised area should be removed locally with a scraper.

As mentioned, I do not intend to go into detail regarding screw cutting as this is a subject in itself but will explain briefly the method I use.

For an Internal chaser I use a tap having the required pitch and mounted in a holder that sets the cutting edge at centre height, Photograph 6. Its diameter is unimportant though where the thread form can be obtained in various sizes I attempt at the finer pitches to obtain the one with the largest diameter for greatest rigidity. Typically a 20TPI thread with a Whitworth form can be had as a 1/4" x 20 TPI standard Whitworth or a 3/8" x 20TPI British Standard Fine, obviously the larger is to be preferred. For a 12 TPI thread where the taps are larger, using the largest is less important, I do though use a new ground thread tap as they are not that expensive these days.

In theory the tap, or chaser, should be set perfectly in line with the lathe's axis. However, as perfection cannot be guaranteed and the tap should NOT attempt to cut on its trailing teeth the leading tooth should be set to cut very marginally deeper than the rest. Photograph 7 shows the tap being checked by traversing the saddle with the tap against the corner of my height setting gauge

A thread tooth cutter can theoretically only suit one helix angle but there is some latitude due to the clearance angles provided by the cutter. However, I do find when cutting a large diameter thread, that will have a small helix angle, with a small diameter tap, having a larger angle, that this may interfere with the required clearance and the tap fails to cut adequately. This though is overcome quite simply by raising the cutter above the centre height by about 0.5 to 1mm when the curvature of the thread being cut increases the clearance and permitting the tap to cut cleanly, Photograph 8. This is not just limited to using a tap as a chaser as I find the same can happen with other thread cutting tools. 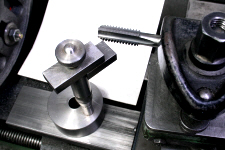