For this task though the setting of both the X and Y traverses is critical. For the Y axis this is set to limit the amount ground from the cutting edge each time it is plunged.  The X axis is though vital as it is used to ensure the full length of the cutting edge is ground whilst not contacting the adjacent edge, the fence requires a stop for this task. The cutter should be set in the holder as shown in Sk. 7.

Having sharpened the primary clearance angle a number of times the width of the surface produced will become excessive and the secondary clearance will require grinding. This is done by increasing the table angle, Photograph 18, otherwise the process is the same as for the primary clearance. If the reader is dubious about the method of just plunging the cutter into the wheel, do take into account that this edge only cuts at its tip and at a maximum width equal to the feed per tooth per rev, no more than 0.1mm even for a roughing cut. This does though depend on the cutting edges forming a concave end, which is essential.

The hexagonal holder, also seen in photograph 16, can be used in a similar way to sharpen the ends of dovetail cutters, or a three flute end mill, a deeper fence will though have to be made. However, as dovetail cutters do not have a helix to their side cutting edges they can also be sharpened as seen in Photograph 19 using additionally the triangular accessory to establish the angle.

Do note that the fence is set to ensure the cutter skirts the corner of the wheel and having no effect on the angle ground, this being achieve solely by the triangular accessory. The clearance angle on the cutting edge is achieve by tilting the right hand side of the table down by the required angle.

Reference to photograph 16 shows that the triangular piece has a small stop included at the large end and the cutter holder is placed against this with both items then being moved forward to sharpen the edge. To ensure that the holder stays against the stop the triangular piece is restrained. This being done by pulling on the  hexagonal key seen in the photograph. This may seem a very rough and ready method but it is easy to use and produces excellent results.

Another cutter that can easily be sharpened is a slitting saw, the setup seen in Photograph 20. There are only three very simple additional parts required, a disk with an off centre hole, a leaf spring and clamp to secure this. The disk enables the method to work with different diameter saws whilst the angle ground on the end of the saw's tooth is adjusted by moving the leaf spring forward or backward, it is also used for indexing the saw. 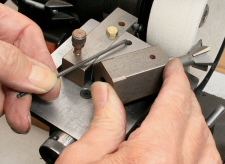 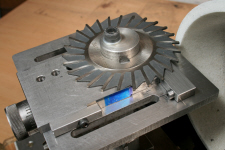