Having made and used my lathe mounted milling head there were two main modifications that I thought to be worth considering and eventually carried out. These consisted of a digital readout for displaying the saddle's movement, and the other, a means of increasing the saddle's traverse available.

As the saddle of my Myford lathe projects beyond the cross slide towards the headstock, this prevents the cross slide worktable from reaching the milling head's columns. On a number of occasions when first using the head I found that having mounted the workpiece that the milling cutter could not reach its extreme edge, as a result I had to loosen the workpiece and move it nearer the left hand edge of the cross slide. Whilst this never prevented me from being able to machine the item being worked on, it occurred to me that if the saddle could pass under the milling head's bottom plate I would have more freedom as to where on the cross slide the part being made was fitted. As a result, I therefore came up with the modification illustrated in  Sk. 1.  As this form of saddle/cross slide arrangement is common many other lathes it will be of interest to most lathe owners.

For those who have yet to make the milling head the preferred method would be to make the base out of thicker material and to mill the recess into it. For those who do not possess a milling machine the following should be a possible method. With a milling cutter in the lathe's mandrel, mount the plate on the cross slide and by progressively increasing the height of the packing under it make the recess in stages. As the actual width and height of the recess are unimportant this should be a perfectly viable approach, if slow.

In my case, having already made the head, and possessing a stockpile of material that seemed unlikely ever to get fully used I decided to fabricate the base plate to give the same result, but at the same time incorporating the digital readout mounting, Photograph 1. Any loss in rigidity by using this method would be minimal, and difficult to detect, and therefore, if the reader is prepared to accept the aesthetics of it made in this way it would be an acceptable alternative approach. Incidentally the modification does also provide a few more millimetres headroom between the cutter and the worktable. 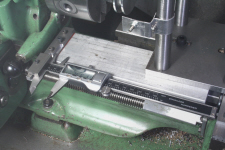