If you are producing this on a lathe with an imperial leadscrew, as I think many will, then you have to accept that the resulting thread will have a small error. Fortunately, this error will be very small. The most accurate changewheel combination, other than using a 127 tooth gear, provides a pitch of 1.49992 mm using 50, 40 and 38 tooth drivers with 45, 55 and 65 tooth driven gears. If you do not have a 38 tooth gear or want a simpler combination to set up then drivers of 65 and 30 tooth gears with 55 and 75 tooth driven gears results in a slightly less accurate pitch of 1.50090mm. If you have a lathe with a screw cutting gearbox other combinations will of course be available if used in combination with the gearbox's settings. However, using one of the above and setting the gearbox to the 8TPI position is one option. The above assumes the lathe has an 8TPI leadscrew.

If using a lathe with an imperial leadscrew then an advantage of making the closing ring also would be that there would be no need to set up for a metric thread, as any comparable imperial thread would do.

Having set up your gears you can now cut the thread, Photograph 7. If you have purchased the closing ring then of course use this to check the result. Having already set the 8° angle machining the internal bore should be straight forward, do though aim to get a good surface finish. Even though great care was taken in setting the angle it would still be a good idea to check it against a collet employing the tried and trusted method of using marking blue. Do this a millimetre of so before arriving at the final diameter so that you still have scope for making adjustments.

For the reader who is not aware of what I mean by using marking blue, a collet should be very lightly covered in engineers blue and placed in the bore and very lightly rotated. Reasonable evidence of the collet touching the bore at both ends will prove that the angle is correct. Do not though expect a total cover. Also, do not force the collet into the bore as it will only defect to fit the angle having been made. Give the bore a final skim to bring it to size and the chuck is ready  for use, assuming you have purchased the closing ring.

As already mentioned I have included the drawings for the closing ring for those who would like the challenge of making one. One aspect of this that I have not mentioned is that a purchased closing ring will be hardened, a feature that would be difficult to include in a shop made item. Hardening would be possible but then having to grind out any resulting distortion would be very difficult. 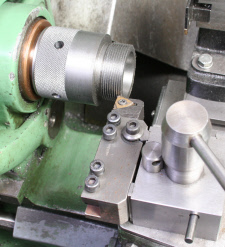