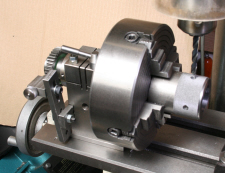 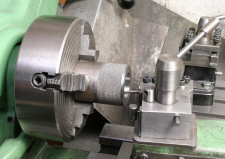 Even though I believe that most will purchase a closing ring, making just the holder to suit their particular lathe mandrel nose, I am including drawings for the closing ring should the economics of purchasing one change. Of course, as I commented, the ring has some complications and some viewers may like to attempt to overcome these as a challenge. The dimensions on my drawings have been taken from the rings I have and to the best of my abilities, and equipment. I cannot guarantee that they are precisely to the written standards that obviously exist. For those who would prefer  a smaller version of the chuck, closing rings for at least ER20 and ER25 sizes are also available.

If you are purchasing a closing ring then there is just one item to make, the Collet body, if not, then two, or three if you include a wrench.

The drawings as dimensioned suit the spindle nose of a Myford series seven lathe and may need modifying for other lathes having a similar chuck mounting method. The manufacturing method will though be identical. However, I am not detailing the method in depth here but if needed see for guidance

If not already available do make plug and thread gauges to check both the internal parallel bore and the thread making them as close a replica of the lathes nose as is possible. Photograph 3 shows typical examples. Whilst the parallel bore needs to be made a very close fit the thread can be a little on the loose side allowing the parallel portion to provide the chucks location.

Now, place a piece of material in the four jaw and knurl the outer diameter, make the internal thread and parallel bore, Photograph 4. Before removing the part from the chuck transfer it to the dividing head and drill the holes for the Tommy bar, Photograph 5. Click on this link should you be interested in details for making the dividing head seen in the photograph.