For me, this project relates to a repair job, but for the viewer it is intended to be the basis for a new workshop project. Even so, some readers may also like to apply the modification to an existing knurling tool.

Briefly, the background to the article is that I made a two wheel knurling tool based on the very common design, Photograph 1. However,I had just purchased a belt sander and thought it would be a good idea to put it to use to give the parts an improved finish. Being new to the machine I was unaware just how much the machine could remove in a short time. Due to the increased clearance that resulted the ends of the arms where they carried the knurls could be moved left and right by  much more than was acceptable.

Whilst not ideal, I persevered with it for a few years until I decided that I would modify the tool placing plates on either side to minimise the sideways movement. Photograph 2.  Researching the design, that I thought was quit common, I could not find a commercial example of it, all being of the type shown in photograph 1. Of course, there are many very expensive and quite different designs intended for use in industry.  The only examples I could find were in issues of the Model Engineers' Workshop  and with Hemingway Kits also providing a kit for a version . It would appear therefore that it is very much a home workshop idea.

Not having to make many of the items, and only increasing hole sizes in other cases, I have not had the option of taking photographs of the processes, the article is therefore largely the design drawings.  For the vast majority of readers this will not present a problem as the parts are all relatively simple items. If any reader would like  more detailed explanations of the manufacturing processes and can obtain issues 78 and 79 of MEW these will give the details required. However, do work solely to the drawings provided with this article as they differ from those in the earlier issues.

Some brief comments regarding its manufacture may though be of help. The aim  to minimise the sideways movement possible at the end of the arm and this calls for the requirement to be considered when making the parts.

Firstly, the 8mm dimension achieved on parts 6 and 11 should be identical, within say plus 0.02mm, and not less than 8mm else the knurling wheels will not enter between the two arms. 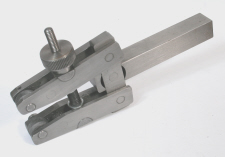