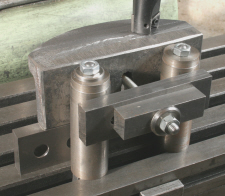 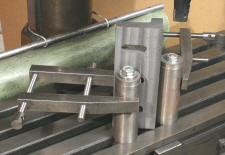 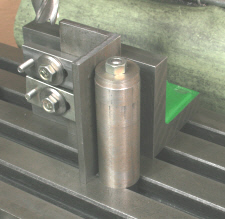 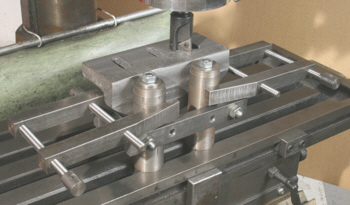 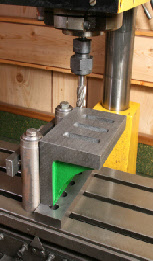 See my pages on 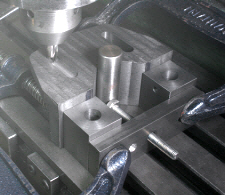 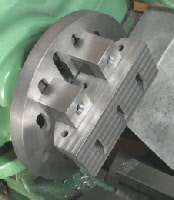 In industry, the cylindrical square is a high precision item, mainly used as a reference for checking machined workpieces and measuring equipment, engineers squares for example. Though they may occasionally end up on the machine table as seen in the photographs here  in the home workshop.

They are also larger than those seen here and very expensive. For me, whilst very occasionally they are used as a means of checking another item, they are primarily used for holding or positioning workpieces on the machine table and possibly doing this more accurately than other methods.

The three pictures here show an angle plate being made from a raw casting. Photo 1 shows the first side of the casting being machined, then Photo 2, the second side. This process ensures that the two faces are accurately square to each other.

Photo 3 is an interesting one in that it ensures that each of the two end faces are square  to their adjacent faces across their widths and square along their lengths to the other faces. Doing this to a high degree of accuracy.   LINK

A more conventional shaped angle plate is seen being machined In Photo 4.

Photo 5 shows a piece of angle iron being positioned upright on one face  using a cylindrical square, whilst the angle plate on which it is mounted ensures the other face is upright. It is much easier than using an engineers’ square, especially if a number of identical parts are being made.

Not cylindrical squares but what I call square squares Photo 6. I use them in much the same way but they are of course difficult to make to the same degree of accuracy. They are though adequate for most tasks.   LINK

Photo 7 shows the square squares being used on the milling machine table. The round post is not a cylindrical square just a piece of bar stock. Its purpose is as a reference for  positioning the slots being milled relative to the vee already machined. I rarely use G clamps but in this case the pivoted end on the clamping screw copes with the taper on the casting, something that other clamps are unable to do.

If you wish to support a part that is too long for the available angle plate, then one advantage of a pair of cylindrical squares is that they can be placed at any centre distance. Because of this they may be suitable for the task.