Small Vee Block made from a casting.    Harold Hall

The subject for this project is a small vee block and whilst small, not without a challenge when attempting to make it using the lathe. It is though an excellent size for using on a vertical slide or small drilling machine, but not limited to that use.

For most, it would be a good idea to make a pair of vee blocks, in which case they should be made as near a match as is practical with the manufacturing method I am suggesting. I will then, at the end, detail the method for matching them.

Two square posts are necessary but as these were described in the small angle plate project, refer to Angle plate alternative Sk. 1 for details.

First, any high spots on the base of the casting should be removed using a file or the off hand grinder and checked against some flat surface. Perfection will of course not be obtained and some soft copper between the posts and the casting will help to compensate for any minor errors. Next, mount the posts on the vertical slide together with the vee block casting as illustrated in Photograph 1. With that done, machine the side of the vee block.

Now with one flat surface, mounting the block will now be easier. With the surface just machined against the posts again clamp the vee block generally as in the previous Photograph. However, the bar must pass between the two sides of the block otherwise if placed on the outside, at best the casting is likely to be distorted and at worst, cracked. Now machine the base.

This project is aimed predominantly at the workshop owner who uses the lathe for milling, but should be of interest to the viewer who's workshop contains a milling machine.

The casting used for this project was obtained from Woking Precision, a firm that was taken over by Hemingway Kits. Hemingway do not list it in their catalogue at this time, 2011, but may still have some stock obtained from Woking Precision. There are though a number of suppliers of castings for vee blocks, but non to this design, that I particularly like, that I am aware of.

For a block this small it would not be too difficult to machine one from a plain block of cast iron, even on the lathe. See below right. 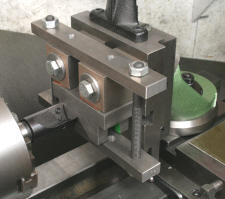 The pictures for this item have been taken using an already machined casting . Click on them to see a larger copy

If making the blocks from cast iron bar this material can be obtained from  The College Engineering Supply, and others.