Working between centres with a dividing head,      Harold Hall

Occasionally, when using a dividing head, it will be necessary to support the workpiece between centres similar to the method used on the lathe. However, there are differences. When using the system on the lathe, invariably the force created by the cutting action will keep the lathe dog against the peg on the catch plate, or faceplate. Even so, most lathe users will keep the dog against the peg using some wire wound round the two, even though it is not absolutely vital.

When working between centres with the dividing head, in this case, any movement between the dog and the device driving it cannot be allowed as this would effect the divisions being created. Because of this, the catch plate is replaced with the item shown in Photograph 1 and drives a bent dog as seen in Photograph 2. It can be seen that the drive device is provided screws for securely locking the rotation of the dog and therefore the workpiece being machined.

For me though, there is a problem with the method in that the position of the bent arm relative to the centre will differ with different diameter workpieces being held. Because of this, the arm may not align with the clamp screws, maybe miss it completely at some diameters.

To overcome this, I developed the device seen being used in Photograph 3, from which is should be obvious that the position of the Driving Plate will vary with changes in workpiece diameter. Being a flat plate, rather than a bent narrow arm, it can easily cope with differing diameters. Photograph 4 shows the complete set up.

Manufacture is straight forward. Just bore the 30mm hole "C" whilst mounted on the lathes faceplate, drill the 10mm hole "B" and join the two using a hack saw, or on the milling machine.

The tapped hole in the driving plate is off centre so that the plate can be rotated to enable the device to work with a wider range of diameters. Photograph 5 shows the completed item. 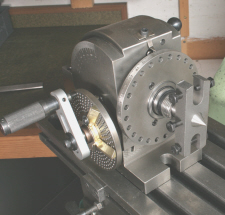 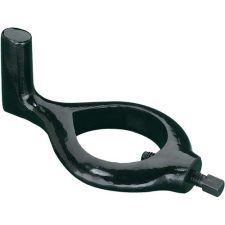 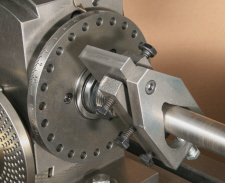 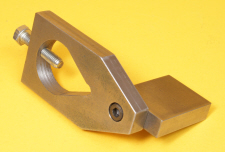