So far the clamps use has been discussed in terms of using it to clamp one part against another, this of course being their main purpose but what about using one as a vice or as an alternative to a vee block.

A toolmakers clamp will make a very useful instrument makers vice for working on very small components as Photograph 9 clearly shows. Note that the special form of clamp is preferable for this as both screws are on the same side.

If  you required a length of 25mm wide bar but only have a length of 1" wide you may wish to skim a little off to reduce it to 25mm, holding it on the machine table. You will though need total access to the surface which may seem a problem. However, using two clamps as shown in Photograph 10 makes the operation an easy one.

If you need to cross drill a part then the following using a toolmakers clamp is worth considering. Clamp a piece of material between the clamp's jaws to ensure they are parallel and clamp this to the drilling machine table. Let's put some dimensions to the task to make the explanation easy to understand. Assuming that a 12mm diameter part is to be cross drilled then space the clamps jaws as above using a piece of 10mm wide strip. With a short piece of 10mm diameter bar in the drill chuck lower this between clamps jaws to centralise it, see Photograph 11, when fastening it to the machine table. Not shown in the photograph but if packing of a suitable thickness is placed between the piece of bar and the end of the clamp holding the assembly to the drill table the eventual distance from the end of the workpiece can be set, see Photograph12.

Start the hole using a centre drill following with a drill to the size. This process would be particularly beneficial if a batch of identical parts is being made. As illustrated, the process is only acceptable when drilling small holes. However, it should not be too difficult to use an overhead workpiece clamp where larger sizes are involved.

Photograph 2 showed a design of toolmakers clamps that is far from common, however, they do have some advantages. The clamps would be suitable for almost all applications where the standard clamps are used but able to be of use in a few cases where the standard ones would not. Probably the most likely usage will be on the drilling machine table as Photograph 13 illustrates. In this a number of parts are clamped together so that they can be drilled simultaneously. They can also be found useful when working on the surface plate. The toolmakers clamp can easily be fastened to the machine table using conventional overhead clamps where heavier duty tasks are being undertaken. I consider that it would at least be worth equipping the workshop with the mid range and largest sizes of this clamp, say 100mm and 150mm nominal lengths.

Whilst the design cannot incorporate a Tommy bar hole in the central nut, this is of limited importance as final clamping is invariably carried out using the outer screw. 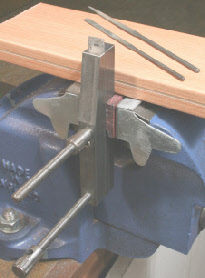 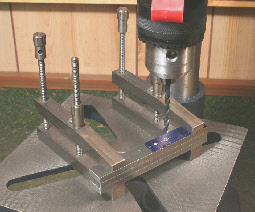