It is very tempting most of the time to attempt to produce a part using just the equipment presently available in the workshop. However, I am a firm believer that spending time making simple jigs and fixtures is frequently very worthwhile. Some, I will detail as they occur throughout the article.

Even without these additions there is very little reason why any task possible on a vertical milling machine cannot be carried out using the milling head being illustrated, only size of the part being made and the accessories used being important. I will therefore consider a few of the possibilities.

In most cases, a 100mm diameter rotary table should be quite at home on an average size lathe as can be seen from the examples included, though for viewers with one of the smaller lathes, 75mm tables are also available and would be more than adequate. I would though add that any viewer who is not conversant with using a rotary table may like to look at my website pages describing their use.

Photograph 2 shows six holes on a PCD being marked out on the drilling jig (Sk. 1) eventually to be used to position the holes on the cylinder block and end covers. The set up uses the jig to Sk 2 which is a multi purpose item. It can be seen that the locator has four diameters that are used as follows. The smaller is a close fit in the rotary table bore ensuring it is accurately located. The other end has a centre drilled impression and is used together with the small centre, seen on the cross slide, placed in the drill chuck to accurately locate the rotary table centrally below the machine spindle. Do note that the smaller diameters will have to be turned with a left hand knife tool so that they will be concentric with the drilled centre.

If your rotary table has a Morse, or other, tapered bore, then an adapter as illustrated in the sketch should also be made.

The 1.000" diameter is used initially to locate the drilling jig when being marked out on the rotary table, as in the photograph, and eventually when drilling the ends of the cylinder block as detailed later. It is also used as a gauge when boring the cylinder block when the slightly smaller diameter is used as an early warning that the bore is nearing size. The larger diameter is purely a clamping flange. The spacer ring in the sketch is used in some of the set ups, including that in photograph 2. 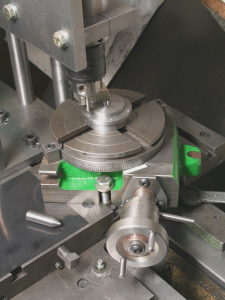