Having completed the milling head, seen elsewhere on the site,I decided I would like to put it to use and in so doing provide some examples  of what can be achieved using it. However, as a departure from my more usual workshop projects, tooling that is, I decided a small stationary steam engine would be a good idea. For this I chose the horizontal mill engine, "Tina", from GLR  Having decided on a "small" engine I was surprised just how big a project it was when the kit of parts was opened up and inspected and realised that it would fully test the milling head I was about to use. As an indication of the physical size of the engine, seen in Photograph 1, the base is 315mm long by 120mm wide and the flywheel 155mm diameter.

The viewer should be aware that this item is not intended to be a fully detailed explanation of the construction of the engine but as an illustration of what can be achieved using the milling head. Even so, most of the more complex machining tasks are described so it should be an adequate guide for building the engine for all but the newcomer to metalworking. In any case it is not really an engine that should be a first project.

In keeping with the principle of making it using just a lathe with the milling head and a small drilling machine, I have not used any other machines in my workshop, even for tasks not illustrated.The viewer can therefore be confident that the engine is within the capability of a workshop comprising a lathe and a small drilling machine. The lathe will of course require either a milling head or a vertical slide, though the latter would only be acceptable if one of the larger ones and even then such items as the base will present additional problems. The flywheel being 150mm diameter will be a problem for those with one of the smaller size lathes. In this case, attempt to find a friendly model engineer (there are plenty of them) who will machine this for you. Failing that, perhaps GLR may have a facility for machining this part, its worth a try.

One final point then before I go into examples of some of the machining operations, that is, my methods have been chosen with using the milling head particularly in mind so as to display its capabilities. Even with a milling head being available, some parts could be candidates for machining by other means, whilst mounted on the faceplate or in the three or four jaw chucks typically. Do not therefore assume my methods to be the best ones to adopt in all cases, though I have not included any that do not work well. To avoid the article being too one sided though, I will discuss a few turning and drilling operations where I feel they are of particular interest. 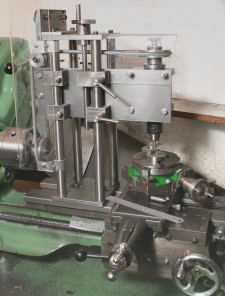 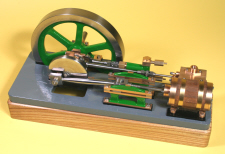